Standing at the east coast of Central America, Belize has miles and miles of coastline where some of the world’s best marine ecosystems can be found. In fact, it has its fair share of recognitions like the world’s second longest reef just tailing behind Australia’s Great Barrier Reef and a consistent top 10 lister for the world’s best scuba diving and snorkeling sites. This is courtesy from Belize’s Barrier Reef, which is also termed as the Mesoamerican Barrier Reef System, that stretches 900 kilometers (560 miles). After being described as “The Most Remarkable Reef in the West Indies” by the famous English Naturalist, Geologist and Biologist Charles Darwin, people started visiting the reefs of Belize where it currently receives around 250,000 visitors a year.

Located in the heart of Central America, Belize is known for its jungles where wild cats like jaguars and ocelots still roam. It is also the home to some of the world’s most ancient culture, like the well studied Mayan Civilization, where one can still see the remains of their society deep in the jungle. This in turn had made Jungle Safari Adventures in Belize a big hit as far as terrestrial tourism is concerned. But for the past few years, tourism has grown to include coastal development where every tourist can see and enjoy the scenic sites of Belize, both in land and in water.

Now, to give you a glimpse of the description of the reefs in Belize made by Sir Charles Darwin, allow us to take you to an underwater tour by presenting its top snorkeling spots.

There are three main atolls in Belize, and Turneffe Atoll is the largest of them all with a dimension of 30 miles (48 kilometers) long and 10 miles (16 kilometers) wide. Within the atoll are hundreds of small mangrove islands and islets that have been conserved and declared as a marine reserve since 2012.

Most of the reefs in Turneffe Atoll are teeming with marine life where one can easily see lots of massive types of hard coral and tropical fish like damselfish, wrasse, parrotfish, surgeonfish and a lot more. However, here’s the thing when you snorkel at Turneffe Atoll: you will realize that the reef is filled with hundreds of lionfish where their population growth is considered off the charts. In one or two instances, your snorkeling guide may ask you to volunteer for the Lionfish Hunting Program which is part of the control method in preventing lionfish to disrupt the delicate balance of its marine ecosystem. If the catch is pretty big, you may have a lionfish for dinner cooked in an elegant array of gastronomical ingredients.

Note: do not forget to visit the inner stretches of “The Elbow” which is considered a primary scuba diving site. Snorkeling in this particular site will give you a glimpse of a vertical wall that runs down up to 30 meters (100 feet) deep.

Located 6 kilometers (3.7 miles) from Ambergris Caye is the oldest marine reserve in Belize - the Hol Chan Marine Reserve. However, being the oldest does not mean that the site is rotten or neglected, but it simply means that marine life has sprouted to its maximum courtesy from the protection it receives.

This small channel that connects to the rest of the Belize Barrier Reef is a favorite day trip for tourist. Once you reach the spot, you will notice that the marine reserve splits into four unique zones. Of all the zones in Hol Chan Marine Reserve, Shark Alley is considered the best snorkeling spot. As the name suggests, the reef is filled with several species of sharks and rays. Once you enter the water, in most cases, the first shark species that will greet your presence underwater is the blacktip reef sharks. They are relatively small in size and fast swimmers and will usually come near you. Try to focus your sight on the reef, and you will see another shark species such as the lemon sharks which regularly swims close to the reef rather than the surface behavior of the blacktip sharks. However, if it is your lucky day, then expect to see other species of shark like Bull Sharks and Tiger Sharks which are relatively huge in size.

Coral Garden is often explored before going to Shark Alley in Hol Chan Marine Reserve. This is the usual itinerary for your snorkeling trip especially if there is a newbie in your group.

This snorkeling spot in Belize is known for a wide diversity of coral species that is set in a shallow water environment which makes it a perfect spot for newbie snorkelers. You will appreciate the shallowness of the area where you can comfortably set or adjust your snorkeling equipment while standing on patches of the sandy bottom. Newbies will also enjoy the calmness of the water as the reef is located in an area that is free from big waves and strong current. As you start your snorkeling adventures in Coral Gardens, you will see that the reef is dominated by several lifeforms of corals like massive, branching and foliose. Aside from corals, gorgonians are also persistent in the area where you can see a healthy population of sea fans.

Other Favorite Snorkel Spots in Belize

Other noted snorkeling spots in Belize are Glover’s Reef Atoll which is a 145 kilometer (90 mile) long reef featuring vertical ledges and sheer drop-offs, the shallow reefs of Goff’s Caye which is an ideal spot for snorkeling with the kids, the Yellow Snapper laden Mexico Rocks, the Half Moon Caye and Long Caye of Lighthouse Reef Atoll and Gladden Spit where it is famous for snorkeling with the biggest fish in the world - the Whalesharks. Ambergris Caye will be of particular interest too for your snorkel trip.

And lastly, just in case you are a certified scuba diver and has earned an advanced skill level of certification, we highly recommend you explore the world-renowned Blue Hole of Belize. This large and deep marine sinkhole is popular with scuba divers from all parts of the globe where you can go deep and multi-level diving in crystal clear marine waters. 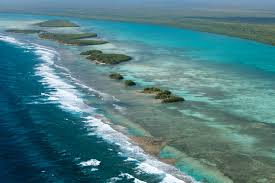 NOTE: June to November is the rainy season in Belize and it can turn up the water making the ocean a bit murky so your visibility might not be the best. Check the weather ahead (even though I know it is very unpredictable) so you can plan to go when there has been a couple days that weren't so rainy and turned up the ocean in case you are planning to visit Belize in the rainy season. Also please make sure to bring reef friendly sunscreen with you to protect the marine life​​​​ in Belize.